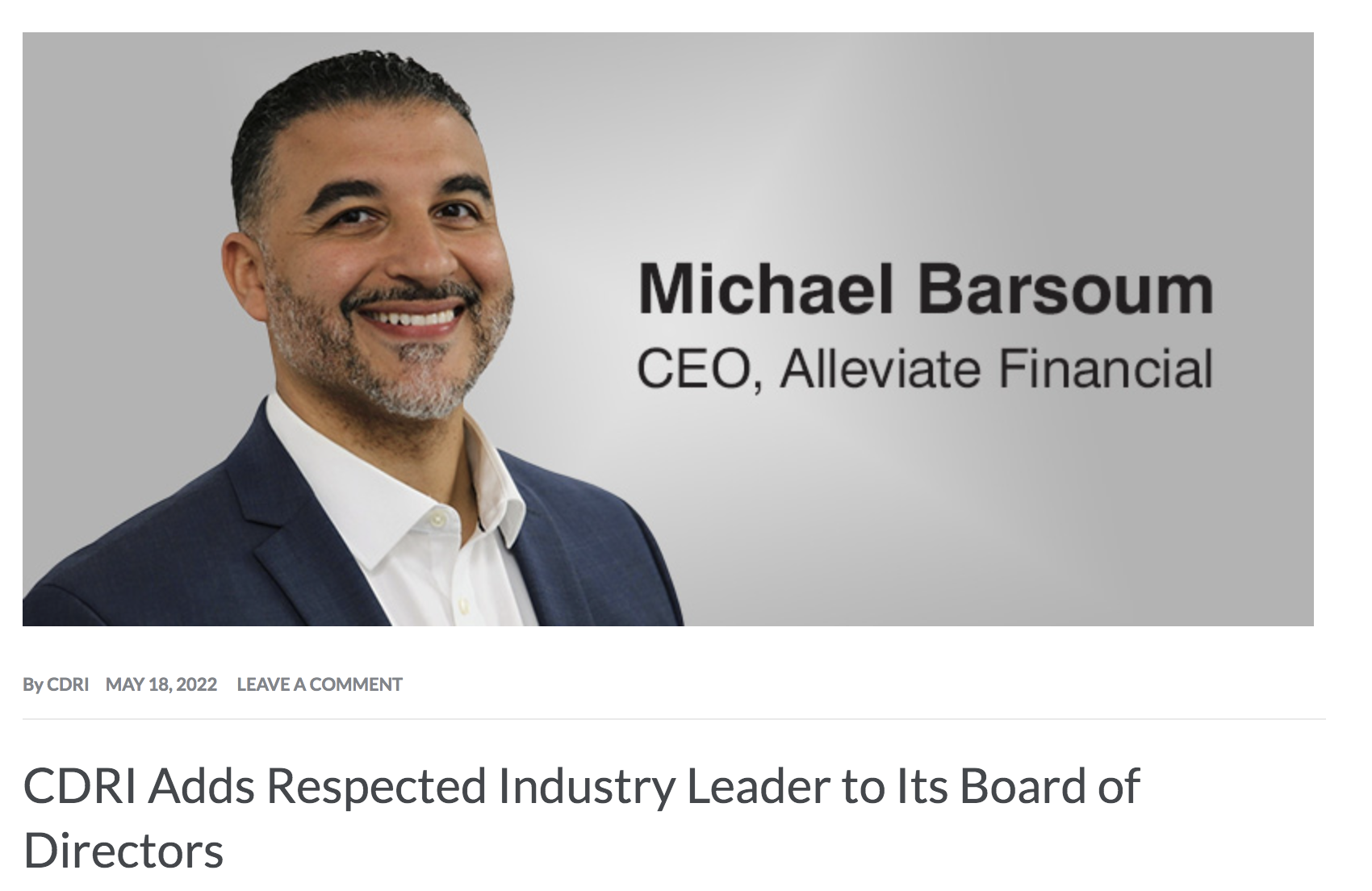 CDRI Adds Respected Industry Leader to Its Board of Directors WASHINGTON (May 18, 2022) — Today, the Consumer Debt Relief Initiative (CDRI) — the premier industry organization dedicated to the protection and promotion of the debt settlement industry — announced the expansion of its board of directors to include Michael Barsoum, CEO of Alleviate Financial Solutions. The association’s rapid growth and this strategic addition better position the organization to thrive, particularly as the evolution of the FinTech space continues.

“Since our founding just 18 months ago, CDRI has become a respected and effective voice for the debt settlement industry,” said Tomas Gordon, CDRI founder and president of its board of directors. “The leadership of our board has driven our success, so we are thrilled to have Michael join the team. His extensive experience and significant accomplishments in elevating our industry give him a unique perspective and ensure he will be a valuable advisor for CDRI.”

Barsoum is an entrepreneurially driven leader with almost 20 years of success in the finance industry, as well as expertise in law, marketing, operations and more. In 2007, he founded his first debt resolution business, which evolved into founding Alleviate Financial Solutions in 2018. It has since grown to become one of the leading debt resolution companies in the nation. Barsoum and his team at Alleviate believe deeply in the company’s mission to help consumers rebuild their financial lives, having helped tens of thousands of client accounts settle hundreds of millions of dollars in debt.

“I am proud and honored to have been asked to join the board of CDRI. The association has become a positive voice for the debt resolution industry, which has helped millions of consumers who are burdened with crushing debt,” said Barsoum. “I look forward to helping CDRI attain -more- 2 continued growth, achieve its objectives and remain a primary advocate for the industry.”

Barsoum received his JD from the University of West Los Angeles School of Law, received his MBA in Finance and Marketing from the Keller Graduate School of Management, and earned a Certification in FinTech from Harvard University. His board service is effective immediately.

About Consumer Debt Relief Initiative Founded in 2020, Consumer Debt Relief Initiative (CDRI) is dedicated to the proposition of improving the narrative around debt settlement, dually protecting members and the consumers they serve. The association’s primary areas of concentration include proactive advocacy, coalition-building and education, while promoting zero tolerance for bad actors in the space. CDRI members must adhere to a strict Code of Ethics that raises the bar for ethical standards, fairness and transparency when providing debt settlement services to consumers.